This past weekend at Mathnasium Learning Centers around the country, elementary school students showed off their math skills and won money for their local schools by competing in our 4th annual TriMathlon. 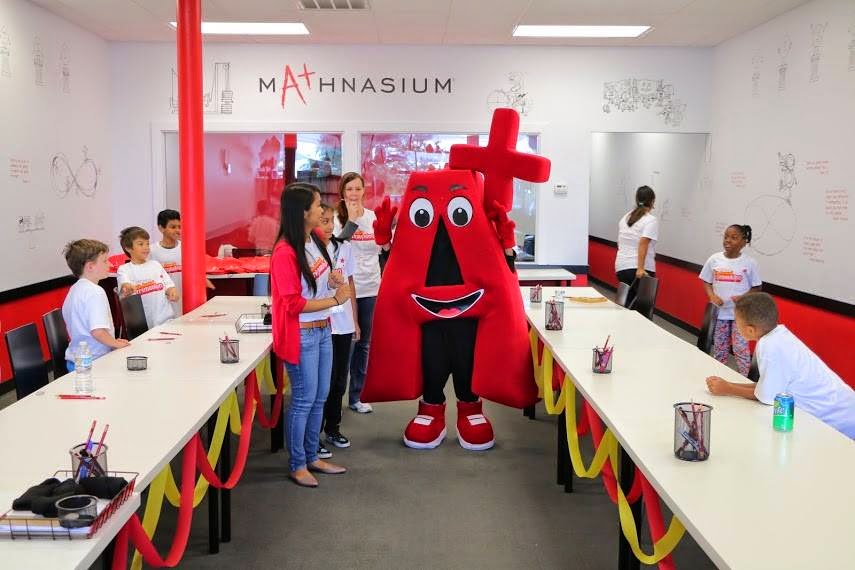 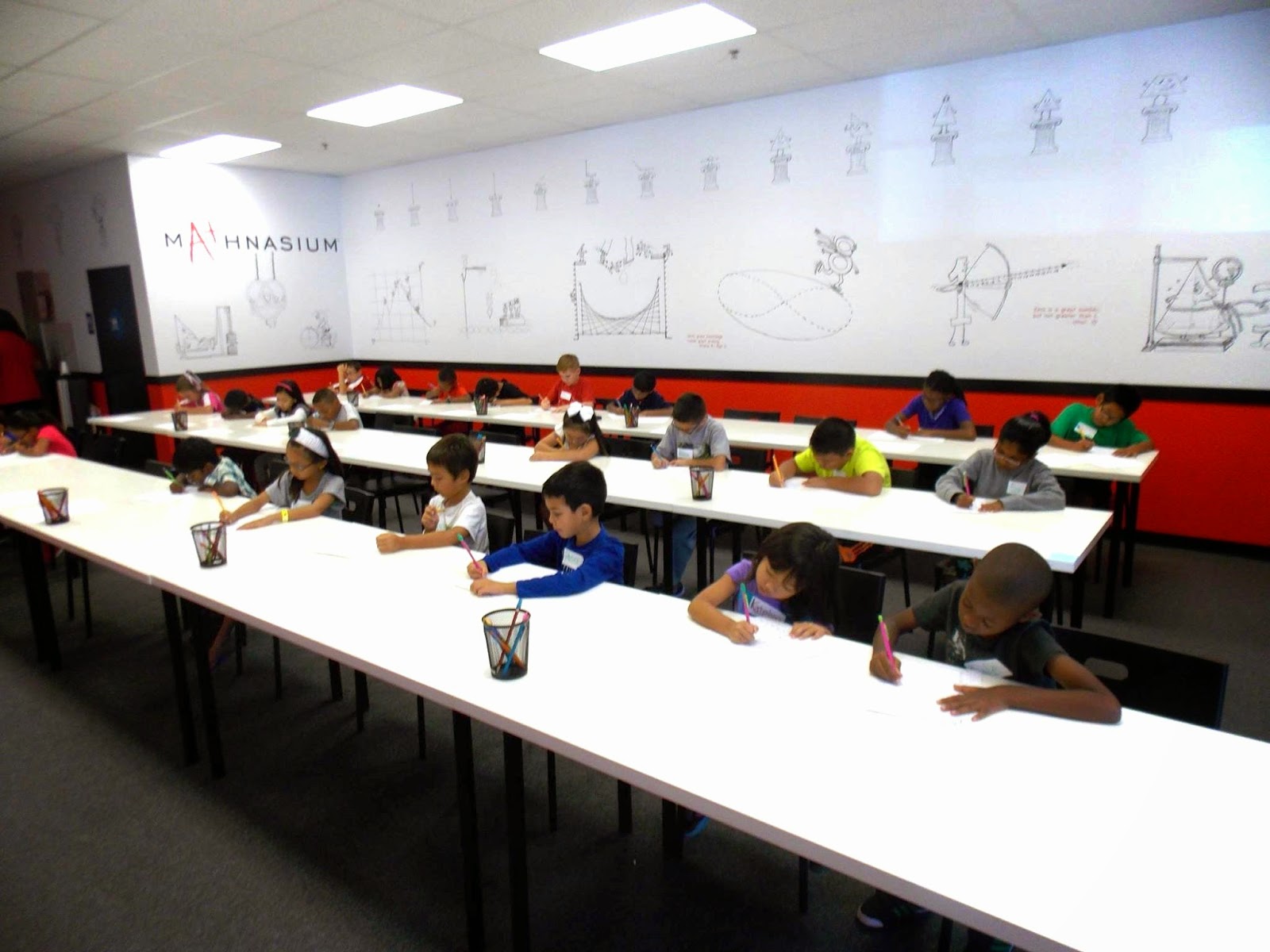 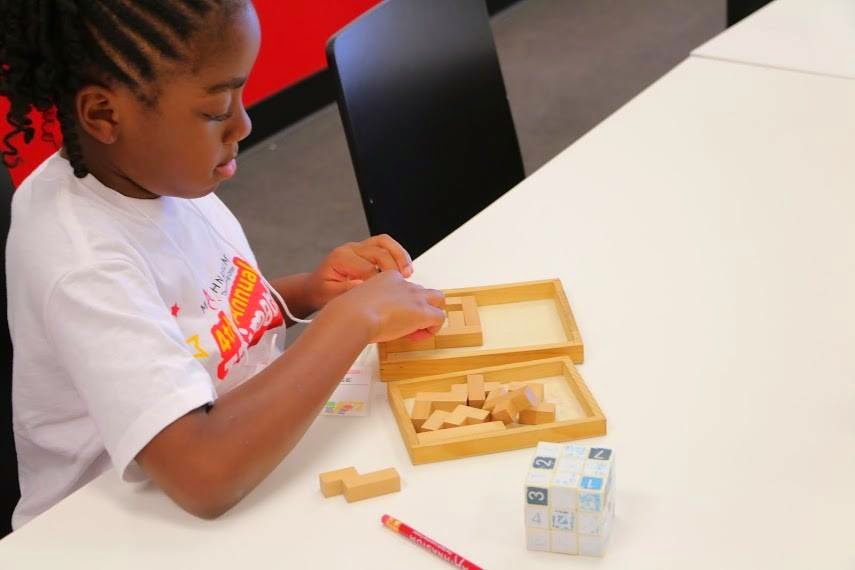 We had a wonderful event this year with more than 3,200 participants at 171 centers across the US and Canada. That's a LOT of TriMathletes showing off their math skills!  If you were able to come out to one of our events, we'd like to thank you for joining in our TriMathlon fun, and we hope you had a blast showcasing your math prowess and making new friends!
Fun for Students! 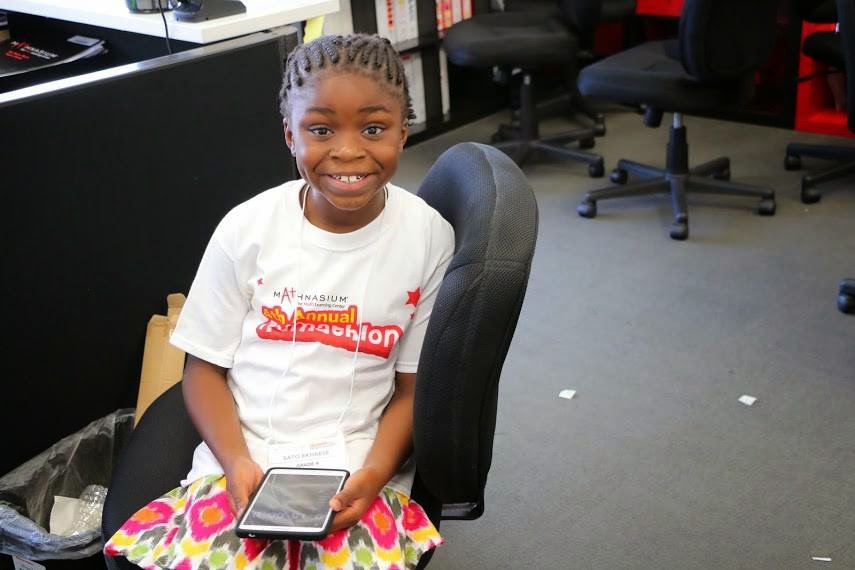 At Mathnasium, it's always our goal to make math fun and accessible for students, and our TriMathlon offers participants a relaxing, engaging environment to challenge themselves and feel good about giving back to their local community. 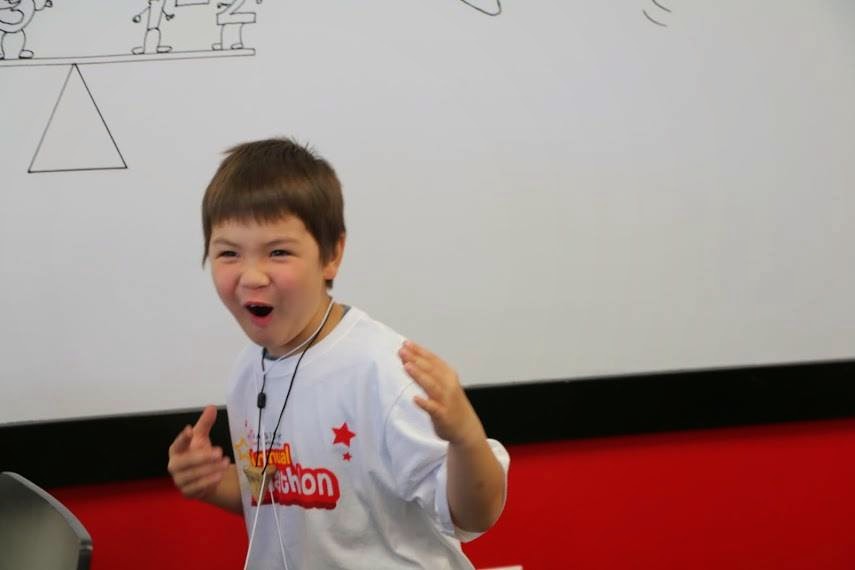 From what we've heard from students, they had a great time! Wilson Fisher, a 5th grader who competed in the Johns Creek and South Forsyth TriMathlon said, "The TriMathlon was a great experience and it strained my brain. I look forward to it every year because I get to put my skills to the test...and it's in a fun way!"

Phoebe Fisher, a 3rd grade participant, chimed in, "I get to show what I know!"

Aubrey Lee, a 5th grade TriMathlete, was impressed with the challenges. "It is cool that it has three different sections and I like that it is not just like 6+6 or something like that."

While the challenges certainly were brain-strainers, our TriMathletes were up to the task—three students at the Johns Creek and South Forsyth TriMathlon had perfect scores! 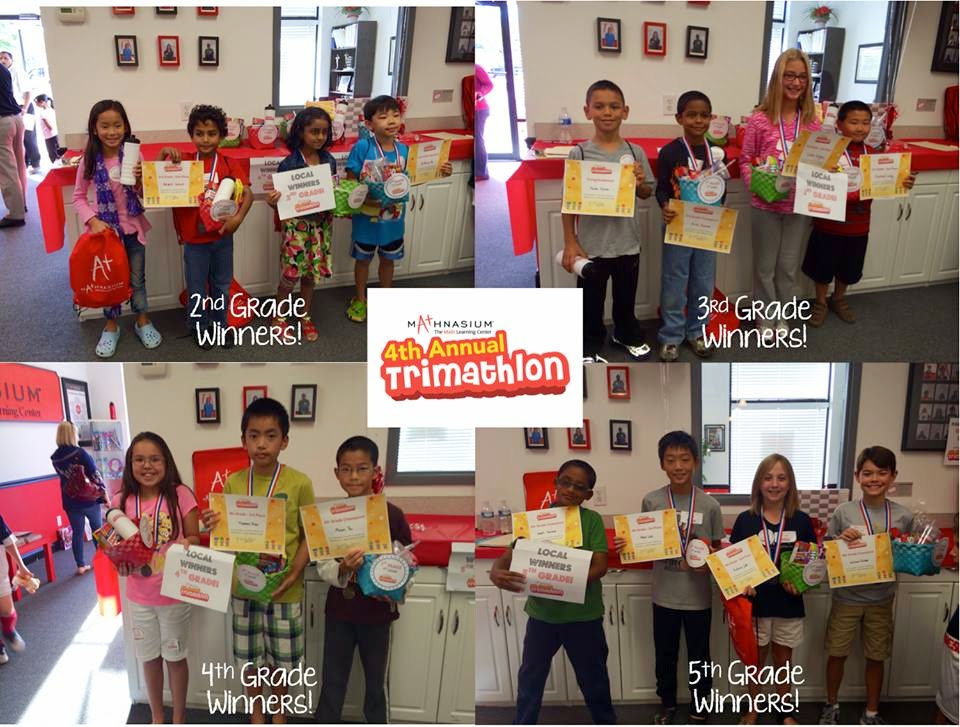 The Mathnasium of Brandon began their event with the Plaza Bella Goes Pink cancer walk, raising over $14,000. TriMathletes got to take a break from competing to check out the 4 Way CountDown, Corn Hole and a photo booth, complete with fun masks! 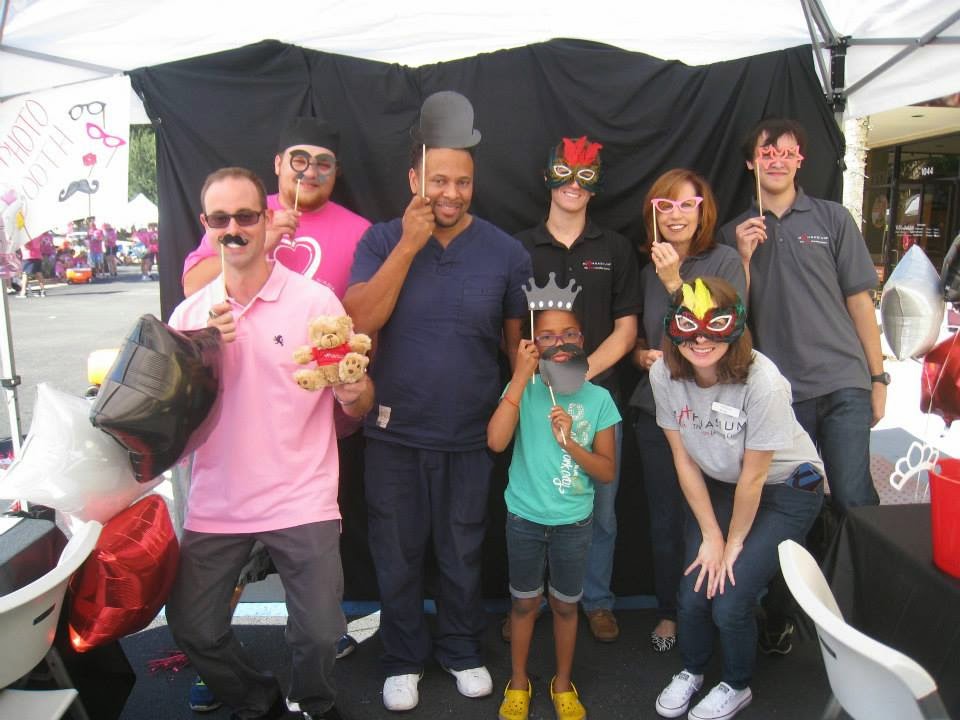 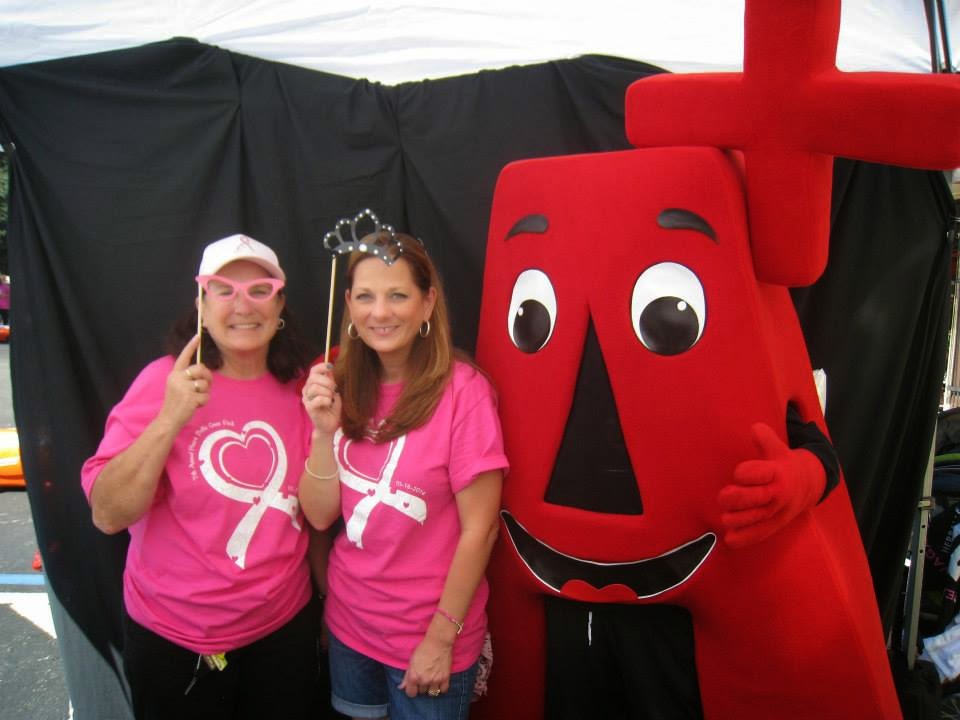 According to Center Director Becky Daniels, there were plenty of delicious snacks in between events. "We had Popsicles for the kids after the competition, muffins while they waited and cookies after awards as a reward."

Speaking of sweet treats, Athena Ramirez, Center Director of Mathansium of Clear Lake, recalls a funny conversation prior to the TriMathlon.

"Here's a conversation I had with one of the 4th graders:

Athena: Niki! You should join the TriMathlon. We have awesome prizes! You get to win a Medal!

Niki: Miss Athena. I'll only join if you guarantee that I get to have candy for TriMathlon!

I thought it was the funniest thing that only candy could get her to go. She did win a medal and her candy, of course."

The Clear Lake TriMathlon instructor team was ready for fun with their students when the event started.

"We had funny gimmicks—like for the instructor name badges, instead of 'Paul, instructor', we put 'Paul, Algebra Ninja', 'Anne, Calculus Commander', 'Cassandra, Geometry Genius', etc. Our name badges were conversation starters since a bunch of the kids and parents were not Mathnasium Students."

The Mathnasium A+ mascot got plenty of love during the Clear Lake TriMathlon as well.

"During the 5 minute breaks in between tests, the A+ would come out. During the first break, Athena, Fraction Fairy, would do some stretches, and the A+ and the kids would follow. During the 2nd break, Paul, Algebra Ninja, had to do 3 Ninja moves. The kids loved it! It was a fun little break before we tweaked their brains again." 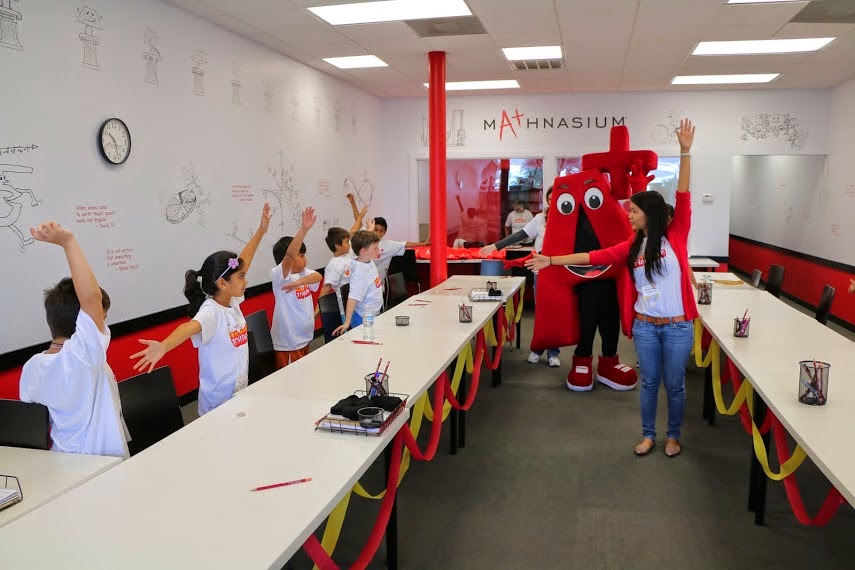 Rangu Mandyam, Center Director of Mathnasium Oak Park, got great response from returning participants when it was time to play the Skip Counting Game while the scores were being tabulated.

"They remembered it from previous years, even though we do this just for a few minutes before giving them some other activity, depending on how long it takes the graders to tally the scores before the awards ceremony.

We stand in a circle and I start with '1'. The next person says 'Bzz' or some other word we choose to skip the even numbers.  The third person says '3' and fourth person says 'Bzz'. This seems too easy, but it is very interesting to see how many kids have to think a bit before saying the next number. We then go to skipping multiples of three. If time permits we go to multiples of four."

"For one round the taboo word was "Bzz," for another it was "Pokemon" and for yet another it was "Ghost." I let the kids choose the word to replace the skipped number. I want to be able to go to skipping 6, 7, 8 etc., but we never have time to go that far."

Check out these fun videos of TriMathlon participants playing the Skip Counting Game:

The Mathnasium of East Round Rock also combined math fun with costume fun for their TriMathlon. 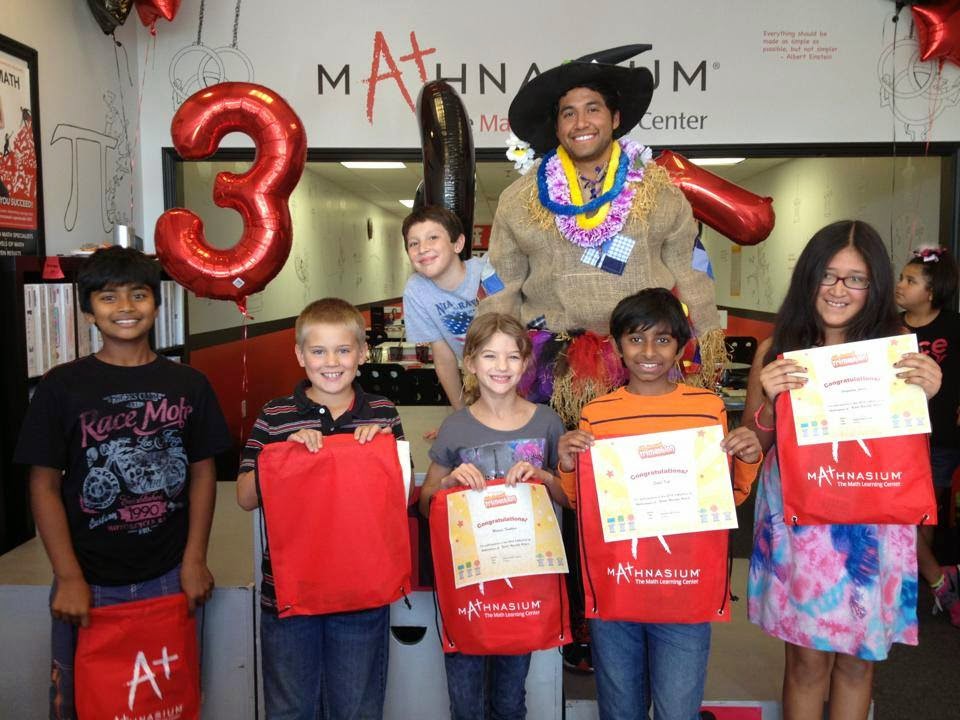 Bill Nobles, Center Director of the Mathnasium at St. Petersburg, had enthusiastic response from students, parents and teachers about their local TriMathlon.

"I think when we started we thought if we could get 10-15 kids in the center for TriMathlon, the event would be a success, since it was our first year. Well, then the enrollments started rolling in. When they got to 30, I thought that was a good number. At 40, I was starting to think it was going to be a very busy day. At 60, I was wondering if we should shut down enrollment, and at 80, I was wondering where everybody would fit!

On the day of the event, we came in early, decorated the center with balloons, had all of our staff on, and nervously wondered how many kids were actually going to show up. As it turns out, we had just under 60 participants, spread almost evenly over the grade levels. Many of the parents, particularly parents of non-Mathnasium students, chose to stay in our waiting area, so we were able to explain the Mathnasium Method and even schedule some assessments as the day went on. We even had two teachers who came just to watch their students and to learn about Mathnasium." 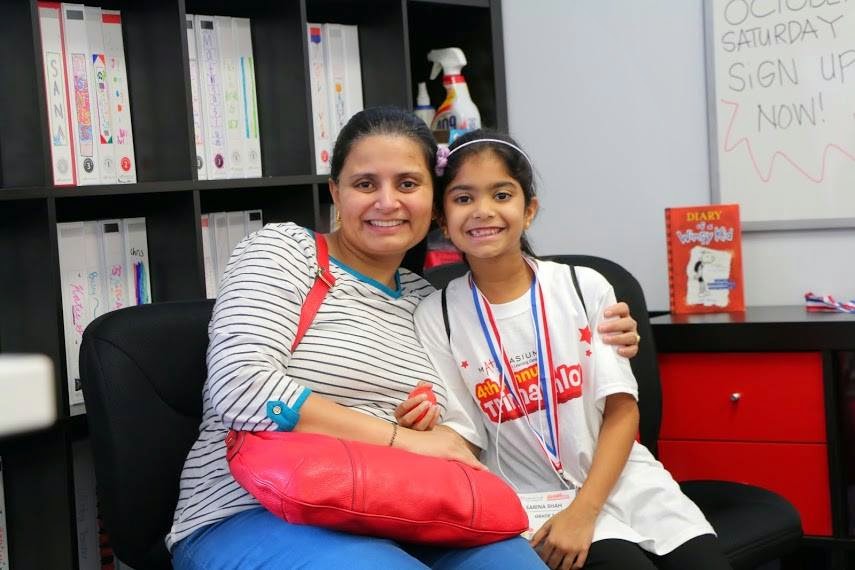 Parents were definitely impressed with the TriMathlon! Two parents at the Mathnasium of Menomonee Falls marveled at how organized their event was, with one parent and their TriMathlete driving over two hours to participate. They enjoyed the competition so much they plan to come back to Mathnasium over the summer for instruction. Another parent told Center Director Anu Deepak that she saw it as "an awesome opportunity for the kids. Her child won the 3rd place and he was so motivated by that and now he wants to do better at the next TriMathlon!"

Cherie Cason, a parent of two TriMathletes, shared her thoughts on the event: "My 3rd and 5th grader participated in Mathnasium's TriMathlon at the Johns Creek location this past weekend. The instructors at the training facility were very nice, warm and welcoming. It was a great experience for my children."

In addition to flexing their mental math muscles and winning money for their schools, each student walked away with a goody bag and a certificate of participation to show off their achievement. 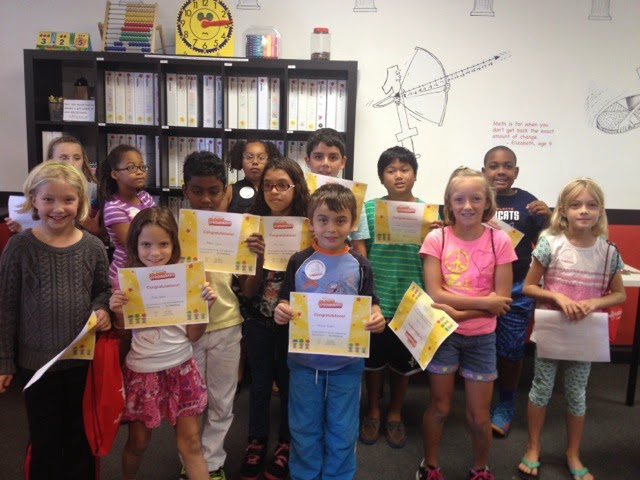 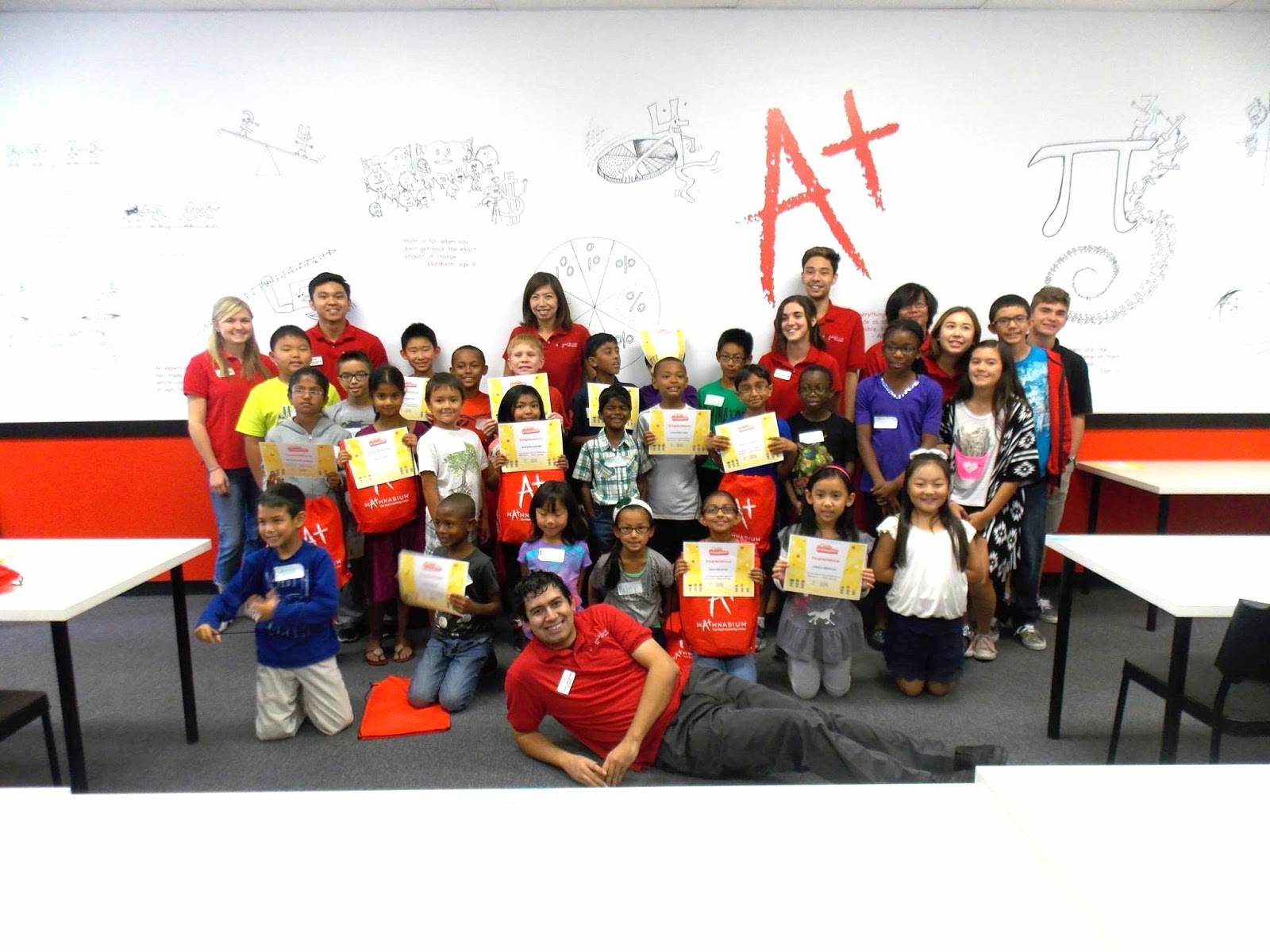 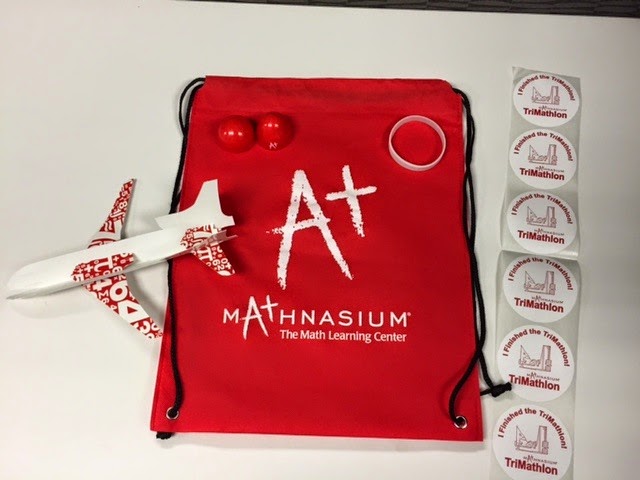 The top three scorers in each grade level received additional medals and prizes. 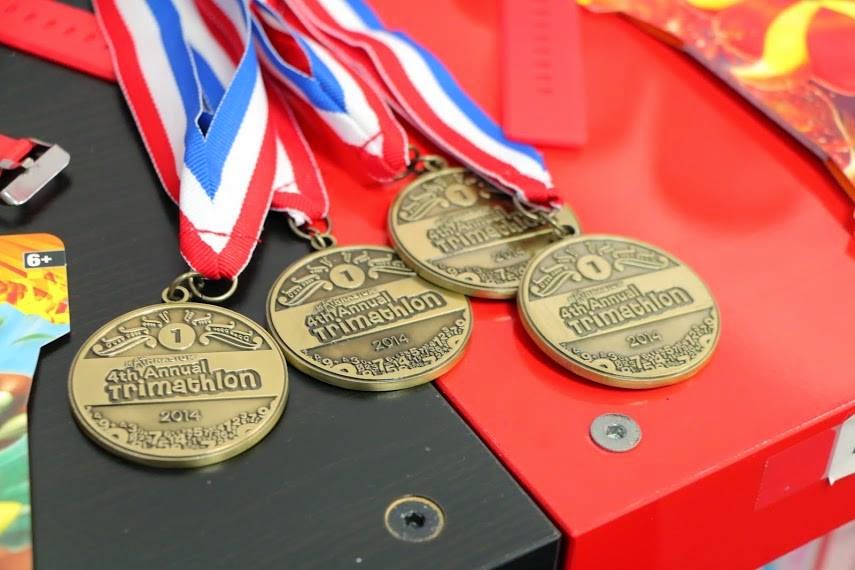 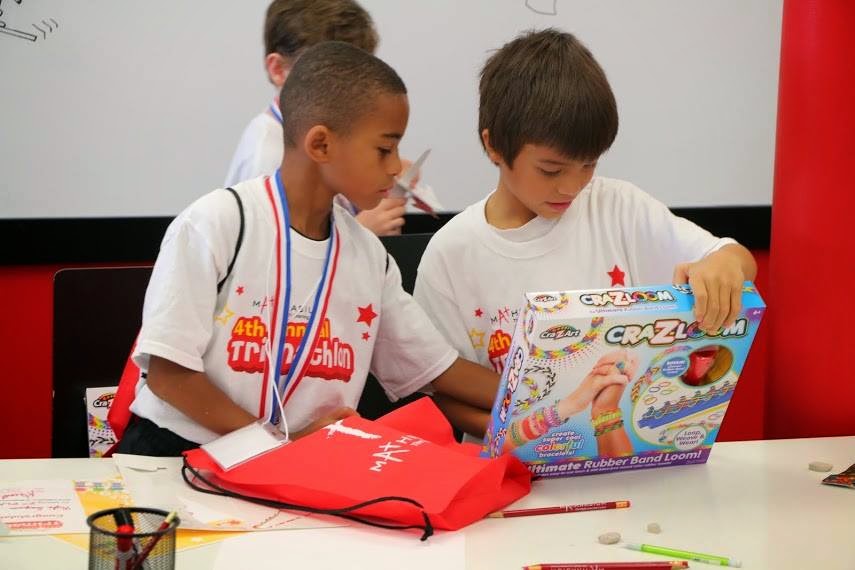 A few TriMathletes showed off their math fitness and their physical fitness on the same day. Martha Gagnon, Center Director of the North Manchester Mathnasium, had two 2nd grade participants who competed in the TriMathlon, then left before the award ceremony for an end-of-season soccer game. Both of them won a medal at the soccer tournament, and while they were there, their parents received an email from Martha saying they were both winners and had won another medal! 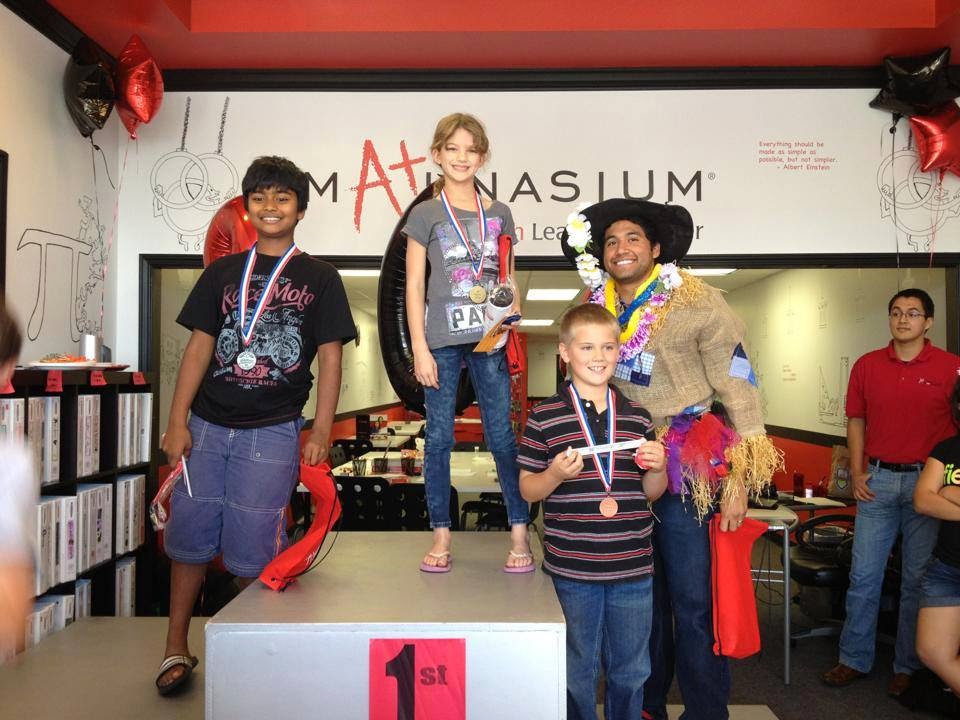 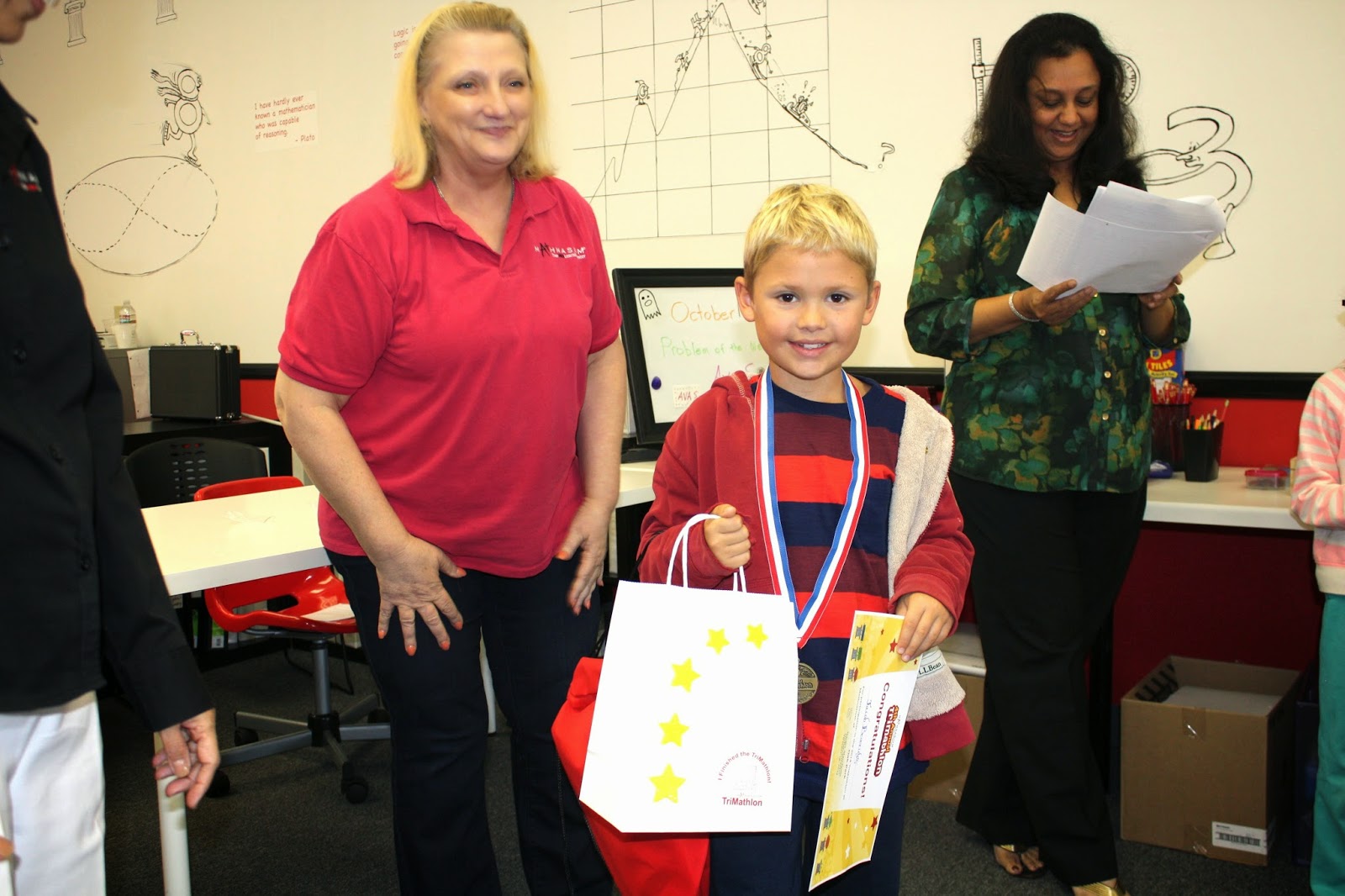 The TriMathlon was made possible thanks to generous sponsorship from You Can Do the Rubik's Cube, Lakeshore Learning, Smarties®, and PrintingForLess®.
Tie-Breaker Time!
The TriMathlon isn't over yet! Top scorers will go on to compete in a Tie-Breaker event to be held on October 26-27th. The event will consist of a top secret final challenge, which is on its way to finalist Mathnasium Centers now! 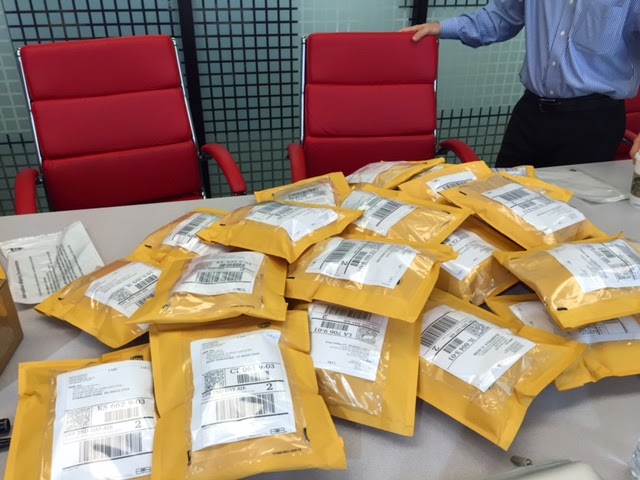 Stay tuned next week on the Number Sense blog for a recap of our TriMathlon Tie-Breaker results! For more fun pictures from our local TriMathlon competitions, check out our Facebook album. 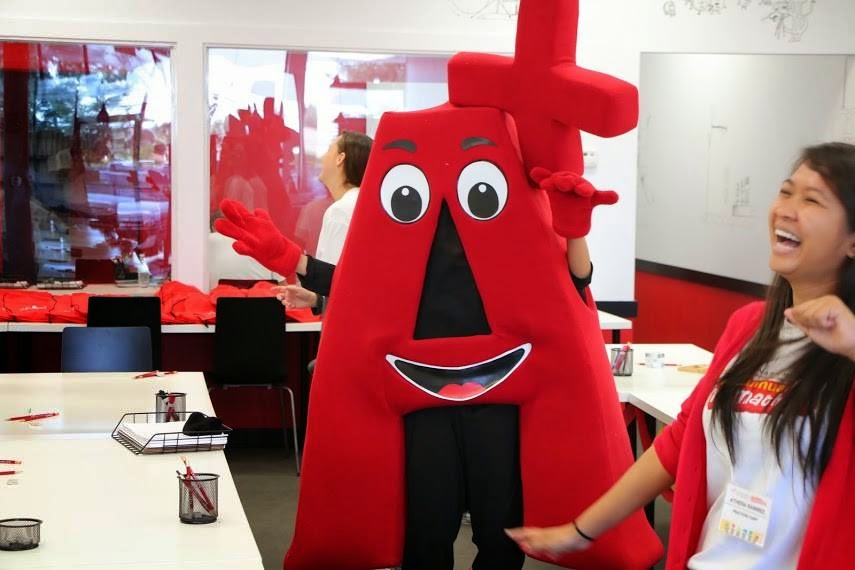 Tell us about YOUR TriMathlon!
Were you a TriMathlon participant or parent? Let us know in the comments here or on Facebook what you thought of your TriMathlon event!
Have your own fun TriMathlon photos? We'd love to see them! Share them with us on Facebook and/or Twitter using the hashtag #TriMathlon.